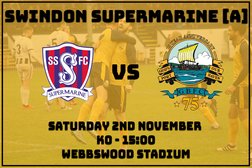 BORO’ Back In League Action - Away at Swindon.

Having won last time out in horrendous weather conditions beating Farnborough in the FA Trophy, the weather could repeat itself with rain forecast on Saturday at the Webbswood Stadium Swindon, when the BORO’ will be striving for a repeat performance and another win.

Gosport who have gone six games unbeaten in the league, which has seen them climb the table to sit in 7th position, know they will be in for a tough test against ‘The Marine’ who are just one place below in 8th spot having played a game less.

As always the club are hoping to see as many BORO’ fans at the game as possible - the players have all commented how the great away support recently has raised their game.

Game Day preview will appear here in the morning.