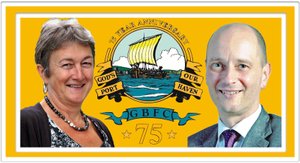 Gosport Borough Football Club is delighted to announce it will be adding two members to its operations board in the new year.

Di Lloyd, the former Principal of St Vincent College in the town, and Colin Farmery, who was also a senior manager at the college and then head of inclusion and safeguarding at Portsmouth FC until he retired in the summer, will join the club on January 1, 2020.

They have already started talking to club staff and volunteers about their new roles and that process will continue in the coming weeks.

The husband and wife duo have attended several BORO’ matches home and away this season and will be involved in the club on a voluntary basis.

Chairman Iain McInnes said: “I am delighted Di and Colin have agreed to join us. They will bring significant relevant experience to the club as Gosport Borough looks to further professionalise its operation and expand its community links.

“Di has an excellent reputation in the town, having worked at St Vincent for 25 years, latterly as the Principal until she retired in 2014. Her community knowledge and contacts and senior management experience are just what the club needs at this juncture.

“I have known Colin for many years, working alongside him both in the community bid to buy Portsmouth FC and then at the club when it was community owned. He has a wide range of skills he can bring to the club and his enthusiasm is second-to-none.

“His recent knowledge of a professional football environment will enable the club to move its operational effectiveness onto another level.”

On joining the club Di Lloyd said: “This is a fantastic challenge for me. I have had connections with Gosport for almost 40 years. My twin sons were educated in the town and, of course, I worked at St Vincent. I have been a follower of football since the 1970s and a regular at Fratton Park, and occasionally at Privett Park, since the mid-1980s.

“I share Iain’s vision of creating a community football club at Gosport and that is what attracted me to the opportunity. I am looking forward to meeting with BORO’ supporters and stakeholders across Gosport to explain how they can help the club move forward and share in its success.”

Colin Farmery added: “Although I am perhaps better known for my work at Pompey, Gosport Borough has always been a club close to my heart since my first game at Privett Park in 1975. I have strong family connections with the town to this day, as well as having spent most of my professional life working here.

“Iain wants to see Gosport playing at National League South level on a sustainable business footing. To do that we will need the support of the Gosport community and I have always been convinced the town has what it takes to achieve that goal.”

“When he approached the two of us to get involved with the BORO’ it was too good an opportunity to turn down. Di and I have a proven track record of working together at St Vincent and we can’t wait to bring our respective skillsets to bear on driving the BORO’ forward.

Come on the BORO’
Welcome to the team Di & Colin.