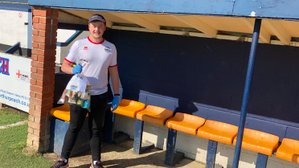 Gosport Borough FC is asking the community to help families and individuals struggling to make ends meet during the Covid-19 crisis by backing it’s “Feed a Family in Need with the Boro’” crowdfunding campaign.

Working off referrals from local schools and the Citizens’ Advice Bureau, since the start of April more than 70 families have received food parcels organised by the club.

The crucial scheme is being run by the Southern League club’s re-purposed Club House manager Keith Slater, but he has revealed the demand has put the club’s donated food supply chain under severe stress.

Keith said: “When we started the food parcel scheme for families and individuals in need in late March, the initial demand was comfortably met by generous donations from local supermarkets Aldi and Morrisons.

“However, news of our service has spread fast and we are now working with the school / home link in three primary schools. In consequence, demand has gone through the roof. This is good news, as we can now help these families, but it has brought some challenges.

“On Saturday I had to buy around £250 worth of supplies from a cash & carry to supplement our stock and I have had to do the same again today . Morrisons are still supplying us with a pallet every week or so, but it’s simply not enough on its own.

“That’s why we’ve launched the crowdfunding campaign to ask the community to donate either financially or in-kind. A conservative estimate is that we need £300 per week to keep the service going, so we are looking to raise £2,500 which would keep us operational until June, which looks the earliest the lock-down is likely to start easing.”

Under Keith’s leadership, the scheme is delivered by 25 fans of the club who have volunteered to pack the parcels and set off on delivery runs around Gosport.

Keith’s salary is being covered by club Chairman Iain McInnes personally, as the club currently has no income after its season was abruptly ended by the crisis, leaving it without matches or a club house facility.

Iain said: “As a club we are proud to be able to support the town of Gosport in its time of need. That’s what being a community football club is all about.

“Financially the club is in challenging waters but we see it as our duty to support and serve our fans and the community at large during this time of crisis and in doing so forge ever stronger links in promoting the historical pride and togetherness the town of Gosport deserves and desires.

“Keith has done an amazing job, considering he only started work at the club on March 17 and was expecting to be serving pints to football fans. His resourcefulness is out-of-this-world and the club, and the community, are lucky to have him.”

The club has teamed up with http://crowdfunder.co.uk/ which is waiving all fees on Covid-19 projects. Supporters can donate from as little as £1. Word of mouth has already seen more than £150 pledged before the site officially went live.

To help keep families in need fed in Gosport - people can click here: https://www.crowdfunder.co.uk/feed-a-family-in-need-with-the-boro The club will even send a digital certificate to every supporter once the campaign ends on May 17 to show its appreciation for the community’s backing.

The club is working with Gosport Voluntary Action and other local stakeholders, including the Salvation Army, to ensure a coordinated response across the borough.
ends

USEFUL INFORMATION
If you are over 18 and fit and well, you can sign up as a Boro’ volunteer. Contact Keith Slater by email at clubhouse@gosportboroughfc.co.uk to find out how

Could you donate some food to help our effort? Contact Keith Slater on 07565 508903 and he can explain how you can do so.

If you are in need yourself, or know someone is in need, you can refer them to GVA either online at http://www.gva.org.uk/coronavirus or by calling their Community Helpline on 023 9254 5588 (Monday-Friday 9am-5pm).

To arrange an interview with Keith Slater or Iain McInnes contact Colin Farmery, communications@gosportboroughfc.info on 07766 305676 or reply to this email.