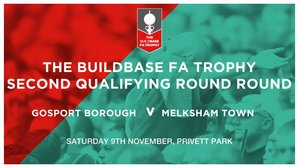 This week’s fitness recovery and training sessions are focussed on preparing the boys, for the next leg of this year’s Trophy adventure.

‘Having taken a few knocks from the game on Saturday it was a blessing we had no midweek game ensuring that we prepare right for what we are expecting to be a tough game against Melksham.

‘Having reached the final of this competition previously we know what it means to the fans and the community so we’ll be doing everything in our power to progress to the next round, so we can all relive that ‘what if’ Cup competition feeling yet again. .....roll on Saturday.....
Lee Molyneaux .

It’s a competition that is close to all Gosport fans hearts, and the club are hoping for a big crowd to cheer on the team.