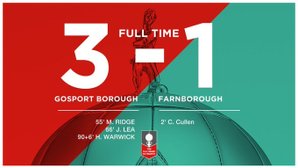 Gosport produce their most dominant display of the season as they won 3-1 against Farnborough at a wet and windy Privett Park.

BORO’ had a slow start to the game with Farnborough taking a quick lead through Connor Cullen. Gosport though got themselves quickly back into match and were the dominant team in the half, however couldn’t score.

BORO’ in the second half continued on the attack and were finally rewarded with three goals from Marley Ridge, Joe Lea and new signing, Harry Warwick.

The win means BORO’ are through to the second round qualifying of the FA Trophy. Gosport next match is in the Southern League Division Premier South away to Swindon Supermarine on Saturday 2nd November.

In the second minute, Farnborough’s Thomas Leggett nicked the ball off Ridge on the halfway line and passed to striker Cullen. The Farnborough striker skipped past Charles Kennedy and slotted the ball under Pat O’Flaherty.

Five minutes later, a cross from the right by Lea is only punched out, by the keeper Liam Beach, to Ridge, whose half-volley is pushed wide of the post by the Farnborough defence.

In the 15th minute, a cross from Matthew Paterson from the right is cleared out to Kennedy who smashed his shot low and hard but the Farnborough defence cleared the ball off the line.

Ten minutes later, Josh Huggins shot from the left is saved by the keeper. The ball lands to Warwick, whose shot is blocked on the line.

In the 33rd minute, Ridge shot from the free kick on the halfway line bounced off the wet surface and evaded everybody to hit the bar. Replays of the shot showed the ball didn’t cross the line.

Nine minutes later, Lea with another cross from the right is hit first time from Paterson, however his shot is just wide.

In the second half, BORO’ were still easily the team on top. In the 53rd minute, Ryan Woodford on the left played in Mike Carter, whose clever chop meant he skipped past the Farnborough defender to put the ball into the box, but Theo Lewis shot went wide.

Two minutes later, Huggins and Lewis together stole the ball off Reggie Young. Lewis then crossed the ball to Paterson, who on the edge of the box laid the ball off to an on-charging Ridge, his first time shot went straight past the keeper to level the score.

In the 60th minute, Warwick was able to pick up loose-ball on the halfway-line, he then ran past two Farnborough defenders, but his shot was saved by Beach.

Six minutes later, Paterson plays through Warwick, who then from the left crossed the ball across the face of the goal, where Lea at the back post smashed the ball into the net to give BORO’ a 2-1 lead.

In the 85th minute, Warwick charged down the right into the box, the number 16 cross was saved with the follow-up shot by Alex John blocked by the Farnborough defence.

In the 96th minute, Huggins tackled Farnborough’s Sean Francis and cleared the ball up Warwick on the halfway-line. The BORO new-boy then skipped easily past Courtney Fearn and one-on-one with the keeper scored to give Gosport a 3-1 victory.