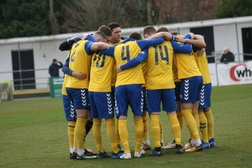 Judgement Day - One Final Push For The BORO'

Last game of the season and we need a win to be sure of avoiding relegation - sounds familiar.

This time last season BORO' went to St Neots needing a result to ensure their safety and delivered an emphatic 4 nil victory, which capped a tremendous end of season run in.
Gosport after losing at home to Kettering 0 - 7, went on to beat Frome at home 7 - 0 the following Saturday, and then beat Dunstable away 0 - 2. The St Neots result ensured we had Premiership football to look forward to this season.

It's fair to say that it hasn't gone exactly to plan this year, and we find ourselves in a similar relegation dogfight needing to repeat last year's heroics.

However we are in a much stronger position going into Saturday's final game, after last Saturday's away win against Staines and Monday's exciting victory against Wimborne, the BORO' now sit in a pack of six teams competing to avoid the final relegation spot.

Gosport's recent successes will give the boys confidence against the Met Police and if we can secure a win, then no one can catch us and we stay up!

With everything so tight other results on the day could mean that we are already safe on 49 points - but the good news is that its all in our own hands.

The buzz amongst the supporters is positive and its looking like the team will be well supported at the Imber Court Sports Club Stadium - with the kick off at 3pm.

The Metropolitan Police have had a great season and have already secured a play off place as they currently occupy 4th spot, just below Salisbury who have a better goal difference.

The other games to watch out for on Saturday are:

Fair to say that all relegation threatened sides have difficult games.

In our last game against the boys in blue, BORO' came out on top and a repeat of that performance would do nicely - but a scrappy narrow victory this time would taste just as sweet.

Come on the BORO'

BetVictor
This is an advert on behalf of BetVictor - Please Gamble Responsibly
Sign up to BetVictor here
Ahead of our final game against the Met Police BetVictor football have given us odds of 2/1 to win
Click here to sign up. Please note that club players and staff cannot bet on football matches.