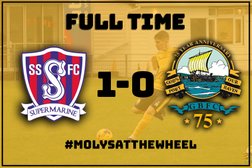 BORO’ fall just short after wonder goal to lose 1-0 away to Swindon Supermarine.

BORO’ have started off November with a defeat and their unbeaten run has ended after their loss against Swindon Supermarine.

Both teams struggled to create chances in the first half, but Stuart Fleetwood put Supermarine 1-0 up with a brilliant volley on the edge of the box.

In the second half, BORO’ were a lot better but were unable to find that final pass or finish to get themselves back in the game.

The result means that BORO remain in eighth place in the BetVictor Southern Premier League Division South. Gosport next game is against Melksham Town in the second qualifying round of the Buildbase FA Trophy on Saturday 9th November.

In the 7th minute, Supermarine’s Michael Hopkins crossed the ball into the left but a sliding Harry Williams put the ball wide of the goal.

Seven minutes later, Alex John whipped the ball from the right into the box, but past an on-running Theo Lewis.

In the 17th minute, John pinged the ball out to Joe Lea on the right, who crossed the ball into the box, however there was too much on the ball for Lewis or Matthew Paterson to reach.

Three minutes later, a cross by Supermarine’s Fleetwood is cleared by Lea only to ‘Marine’ midfielder Bradley Gray, whose volley goes wide of the goal.

In the 25th minute, John hit a long ball over the defence from the halfway-line, only for the ball to be just out of the reach of Marley Ridge.

In the 32nd minute, Lewis cleared the ball from corner, which landed to Harry Warwick on the halfway line. The striker against two defenders managed to get to the box, but his cross went straight to the keeper.

In the 42nd minute, Gray’s cross into the box was cleared, by Lea, only to the edge of the box, where Fleetwood smashed his volley into the bottom left corner of the goal, to give Swindon Supermarine a 1-0 lead at halftime.

In the second half BORO’ were the stronger team and started to create better chances. In the 56th minute, Lea crossed the ball from the right into Ridge on the edge of the box. The BORO’ midfielder drove into the box but his cross was blocked.

In the 73th minute, a nice one-two between Lea and Liam Robinson put Lea in space to shoot, but he could only put the ball into the side-netting.

Four minutes, Paterson looped a ball over the top of the Supermarine defence to put Toby Flood through one-on-one. However, just as the new BORO signing was about to shoot the ball bobbled and was forced to square it, but the pass did not have enough on it and was cleared.

In the 81st minute, Lea crossed the ball into the box from the right, where Flood’s shot was straight at the keeper.

In the 88th minute, Paterson flicked the ball into the box to a chasing Lea, who is tackled by the Supermarine defender and keeper, and ball goes wide of the post.